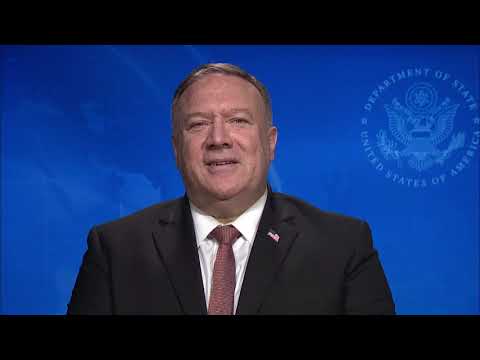 Secretary Pompeo noted that the United States and India are the oldest and the most populous democracies in the world. The two countries “share a reverence for freedom, rule of law, and human rights that runs deep,” he said, emphasizing that India is one of a few trusted, like-minded countries with which the United States collaborates on a full range of global issues. He outlined three notable aspects of the U.S.-India Comprehensive Global Strategic Partnership and previewed ways in which our relationship can become even stronger.

Secretary Pompeo acknowledged that, more than ever before, the United States and India have a shared understanding of the challenges facing our countries, the region, and the world. The Secretary discussed the “true scope of the challenge posed by the Chinese Communist Party (CCP).” At risk are “our infrastructure projects, our supply chains, our sovereignty, and our people’s health, and safety,” he said.

Secretary Pompeo pointed to the recent clashes along the India-China Line of Actual Control initiated by the People’s Liberation Army as “just the latest examples of the CCP’s unacceptable behavior.” The Secretary extended his condolences for the deaths of 20 Indian service members and underscored the need for democracies to work together to address China’s increasingly aggressive posture vis-à-vis its neighbors.

Turning to practical ways in which the U.S.-India relationship can protect our shared interests, Secretary Pompeo welcomed India’s partnership in multilateral diplomacy — a “key pillar of President Trump’s foreign policy.” The Secretary praised the United States’ and India’s work together on the World Intellectual Property Organization election. Together, our countries ensured that new Director General of the organization would respect intellectual property rights, and the United States welcomed the election of Mr. Daren Tang in this position.

Secretary Pompeo expanded on India’s importance in multilateral fora, noting that the United States and India, together with Japan and Australia, have revived the “Quad.” The Secretary also highlighted India’s participation in a group of like-minded nations that he convenes regularly to advance shared interests.

Looking to the future, Secretary Pompeo welcomed Prime Minister Modi to the next G7 meeting. The Secretary previewed a G7 priority for the United States and India: to advance the Economic Prosperity Network, a group of countries and organizations that are our natural partners based on shared values.

The United States and India enjoy a strong relationship that has grown tremendously in recent years, and Secretary Pompeo urged India to take advantage of opportunities to work even more closely with the United States. Noting that the world is looking to diversify supply chains as it recovers from the COVID-19 pandemic, the Secretary said that India has the chance to reduce its reliance on Chinese companies in areas like telecommunications and medical supplies.

As Indian policymakers reexamine their country’s supply chains, Secretary Pompeo urged them to remember their own recent history and the power of free markets as “the best way to lift people out of poverty.” The Secretary invited India to work with the United States to advance the Blue Dot Network, an initiative to promote high-quality, transparent infrastructure development. The initiative is “critical” as countries recover from the COVID-19 pandemic, he said, underscoring the importance of the private sector in economic recovery. To that end, the Secretary encouraged India to create an environment more open to increased trade and investment.

Secretary Pompeo closed on a warm note, highlighting the “spirit of hard work and entrepreneurship” that Indians and Americans share. As Secretary Pompeo said, “I’m confident our partnership is only getting stronger. Let’s emerge from this current challenge more resilient and innovative than before. And let’s seize this moment to deepen cooperation between two of the world’s great democracies.”

About the Author: Grace Chung is a Press Officer in the Bureau of South and Central Asian Affairs at the U.S. Department of State.