DipNote: This Week At State 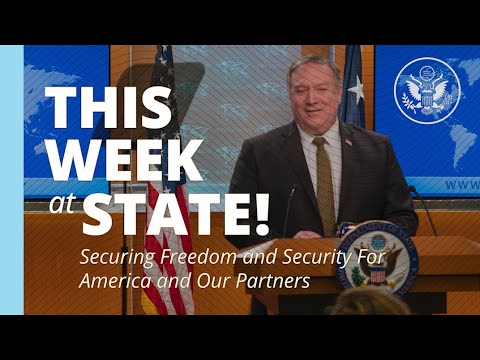 Did you miss key foreign policy developments this week? We’ve got you covered. Each week, DipNote recaps the latest U.S. Department of State highlights spanning a wide range of global issues, events, and initiatives in one blog post.

Here are the highlights from This Week at State :

In a June 6 statement, Secretary Pompeo condemned the Chinese Communist Party’s callous exploitation of the tragic death of George Floyd to justify its authoritarian denial of basic human dignity.

“The exploitation exposes its true colors yet again. As with dictatorships throughout history, no lie is too obscene, so long as it serves the Party’s lust for power. This laughable propaganda should not fool anyone.”

In a June 9 statement, Secretary Pompeo asserted the United States stands with our allies and partners against the Chinese Communist Party’s coercive bullying tactics. In the latest example, Beijing has reportedly threatened to punish British bank HSBC and to break commitments to build nuclear power plants in the United Kingdom unless London allows Huawei to build its 5G network. Shenzhen-based Huawei is an extension of the Chinese Communist Party’s surveillance state.

Opening of U.S. Consulate in Nuuk

On June 10, the Department celebrated the reopening of the United States Consulate in Nuuk, Greenland, on June 10, 2020, reflecting America’s commitment to deepening our cooperation with the people of Greenland and the entire Kingdom of Denmark. U.S. presence in Nuuk will enhance the prosperity we share with our friends in Denmark and Greenland, as we work together with other Arctic allies and partners to ensure the stability and sustainability of development in the region.

On June 10, Secretary Pompeo rolled out the 2019 Report on International Religious Freedom. Here is no other nation that cares so deeply about religious freedom, that we gather accounts from all across the world – it’s an enormous, it’s a comprehensive accounting of this fundamental human right. Below are a few highlights from the report:

Religious persecution and violence against individuals for their religion or belief continues across the world. Eight out of 10 people worldwide face restrictions on religious freedom. https://t.co/TLpiw4HYUY pic.twitter.com/7fK57bRLVs

.@SecPompeo: There is no other nation that cares so deeply about religious freedom that we gather accounts from all across the world. pic.twitter.com/h3jgt4UWet

On the Passing of Ambassador Henshaw

The Department is saddened by the passing on June 9 of Ambassador Simon Henshaw. The Secretary expresses his sincere condolences to his family and all those who worked with him throughout his career. Since joining the Foreign Service in 1985, Ambassador Henshaw served our country with honor and distinction. As Ambassador to Guinea, Ambassador Henshaw worked tirelessly with Guinea’s leaders and its citizens to promote inclusive economic development, democracy, tolerance, and respect for human rights. For more information on Ambassador Henshaw’s career, please direct your attention to the Secretary’s statement.

On June 11, Secretary Pompeo held a press availability with Secretary Esper, Attorney General Barr, and National Security Advisor O’Brien. They announced the following actions that the Administration is taking against ICC officials:

.@SecPompeo: The essence of an America First foreign policy is protecting our servicemen and women who put their lives on the line in defense of freedom. We will not stand idly by if the ICC follows through with its ideological crusade against American service members. pic.twitter.com/NNcE2kAQeW

First, we’re authorizing the imposition of economic sanctions against ICC officials directly engaged in the ICC efforts to investigate U.S. personnel or allied personnel against that allied state’s consent, and against others who materially support such officials’ activities.  Designations will be made on a case-by-case basis against specific individuals or entities.

And second, the United States is expanding visa restrictions for officials directly engaged in those same investigations.  We’re extending and expanding these restrictions to include their family members.

.@SecPompeo: We cannot allow ICC officials and their families come to the U.S. to shop, travel, and otherwise enjoy American freedoms as these same officials seek to prosecute the defenders of those freedoms. pic.twitter.com/sOrYvVnxDZ

The United States is leading by example in women’s empowerment on the global stage. On June 11, the Department of State released its Plan to Implement the U.S. Strategy on Women, Peace, and Security.  The Strategy focuses on supporting women leaders around the world who make contributions to global security, including by ensuring the Department and its personnel have the necessary skills and tools to carry out this important mission.

The Department's Strategy on Women, Peace, and Security strengthens the participation of women in efforts to prevent conflict and promote security. The U.S. is committed to advancing the vital role of women in building peace around the world. #WPSinAction https://t.co/UkEWm1TdGP pic.twitter.com/qrSeoPzG3H

For decades, American diplomats have supported women as leaders in efforts to prevent conflict, counter terrorism and violent extremism, and promote security around the world.  In 2017, the United States became the first government in the world to enact comprehensive legislation on the role of women in peace and security, which the Department of State is committed to fully operationalizing through its Plan to Implement the U.S. Strategy on Women, Peace, and Security, which include a range of initiatives.

For more information on COVID-19 or coronavirus, please refer to the below websites:

Each week, we recap the latest from the U.S. Department of State and cover a wide range of global issues, events, and initiatives. To learn more, go to 2017-2021.state.gov and follow @SecPompeo , @StateDeptSPOX , @StateDept  and Facebook .